Cereal of the future... free? 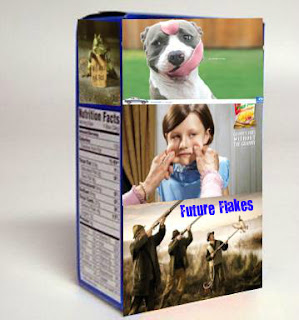 This idea came the other day as my wife and I were having a late-night bowl of cereal...

Why not start a cereal company that covers its boxes with interesting ads? It'd undoubtedly give advertisers plenty of looks on super market shelves and on kitchen tables.

With the advertising revenue, it could drastically beat the price of competitors.

And, it could go a step further... Why not put a pack of ads/coupons inside the box itself? Advertisers send stuff like that in the mail all the time, and I imagine cereal-box delivery would give their fliers a longer lifespan before hitting the trash can.

Who knows? Maybe the cost of the cereal could be so subsidized that you could sell it for a dollar or less? Or, even give it away for free? Sounds like a cool way to help the poor to me.

I also thought about the potential of working advertisements into other food packaging, but other items seemed less promising. Who's going to give their pasta bag a good look before tearing it open and throwing it away? No, cereal boxes are the best option. They last several days - if not weeks - before landing in the bin and people are already accustomed to reading them.
Crazy ideas