By Adam B. - October 06, 2015
We have proven it yet again. As Latter-day Saints (Mormons), we can be our own worst enemies in the media. The way we sometimes bicker and build mountains of molehills must cause outsider eye rolls.

The irony is that we are generally pretty forgiving and slow to leap to conclusions about others' intentions when it comes to non-members. But when it comes to the foibles of members of our LDS church family, from one small act we are somehow blessed with pure knowledge of the dark inner-workings of souls.

Remember how brutal some internet-vocal Mormons were in response to the color of LDS violin phenom Lindsey Stirling's dress back in May? Now, the angst is aimed at former NBA baller and current LDS leader Devin Durrant.

Last Sunday during general conference, millions heard Durrant's call to come closer to God through "ponderizing" a particular verse of scripture each week. While the coined phrase is admittedly cheesy (his whole demeanor seemed to say, "I know the word 'ponderize' is a bit silly"), the idea is awesome. The idea is putting a verse of scripture someplace you'll see it throughout the week and reflecting on its meaning and application in your life. 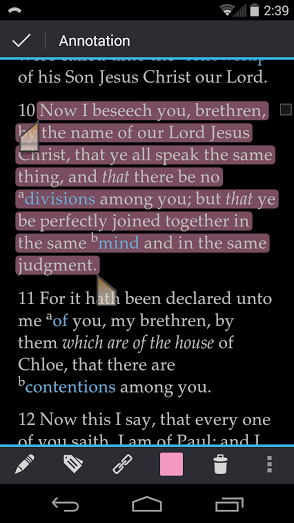 Personally, I was deeply touched by his invitation. Even before conference was over, I chose a scripture for the week and made it my phone background.

You aren't going to believe it: "Now I beseech you, brethren, by the name of our Lord Jesus Christ, that ye all speak the same thing, and that there be no divisions among you; but that ye be perfectly joined together in the same mind and in the same judgment."

I had never really paid much attention to that verse before. I came across it by way of random navigation in the Gospel Library app. I certainly had no idea just how timely 1 Corinthians 1:10 would be.

Last night, my wife got me up to speed about how some members have been attacking Brother Durrant because his son had set up a website to sell "ponderize" merchandise (T-shirts, wrist bands, etc.). I came across an article by an old classmate and friend of mine who reported on KUTV.com about how Brother Durrant promptly apologized. In response to public outcry, his son took down the site.

In a way, it looks pretty bad. Durrant is an investor by profession. Was this an opportunist's attempt to cash in on conference? Is the Durrant family really trying to serve God or is it trying to serve its own bank accounts?

I can see where critics are coming from. However, as a student of the law, I have begun to appreciate a little just how difficult it is to get into others' minds and figure out their intent. We have a very limited sampling of words and acts, and absolutely nothing from the actual thoughts of those we accuse. Even so, the idea that Brother Durrant or a member of his family would try to get rich quick on a conference-based T-shirt seems pretty far fetched.

As mentioned, Durrant is an investor by profession. I have only a little experience investing and the thought of making and maintaining a website, packing and shipping some "ponderize" shirts, sounds like a whole lot more of a nuisance than a rainmaker. In terms of opportunity cost, it just wouldn't make sense to me to go down that road, unless I was doing it more as a service, a way to remind people of what I thought was an important message.

The Durrant's have been "ponderizing" for some time. They are big fans. Making shirts to help others jump on board probably sounded fun. I highly doubt they had even a hint of nefarious purposes. Why else would they be so willing to drop their prices to just cover costs or donate any profits?source

Alrighty, I think I have about made my point. There is a scripture about charity that says charity "thinketh no evil." Though it can be good to have our eyes open to what is going on around us, we really should give others the benefit of the doubt.

Even if they are Mormon.

Even if they are church leaders.

Rather than "scandalize" (mixing 80% negative assumption with 20% truth to come up with a theory about what's in others' hearts), let's try something more productive. How about we "ponderize"?