Put down the eye drops. Get off your rear. Embrace the freedom to study anytime, anywhere. All you need is an ear. Audio outlines help you mitigate exam anxiety and juggle the challenges that life and law school throw at you. 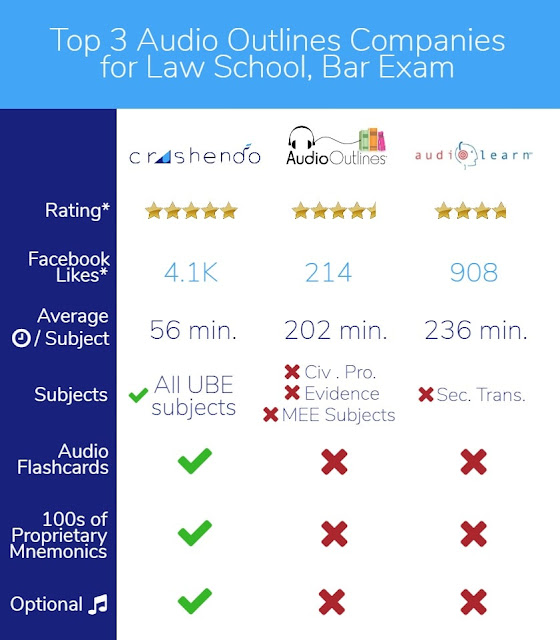 First, look at the stars.   AudioLearn lags behind with an average 3.8-star rating. AudioOutlines maintains a more impressive 4.5-star average. But Crushendo has a flawless, 5-star rating.

Now, let's talk efficiency.  Everyone knows it's harder to be concise than verbose. Distilling doctrine to its critical parts is not for the faint of heart. While AudioOutlines and AudioLearn take somewhere between three and four hours on average to cover a given subject, Crushendo does it in just an hour.

Despite all that, innovation may be the greatest differentiator.  Crushendo offers audio flashcards (affectionately dubbed "CrammerTime"), hundreds of proprietary mnemonics (a.k.a, memory hacks), and even optional classical background music.

That all must mean Crushendo is crazy expensive, right?  True, one thing the comparison chart doesn't show you is cost. AudioOutlines and AudioLearn both sit in the same ballpark ($20 to $30 per audio outline). Crushendo comes in a touch higher with $37 per audio outline. That said, Crushendo always includes written outlines and visual flashcards to complement your audio.